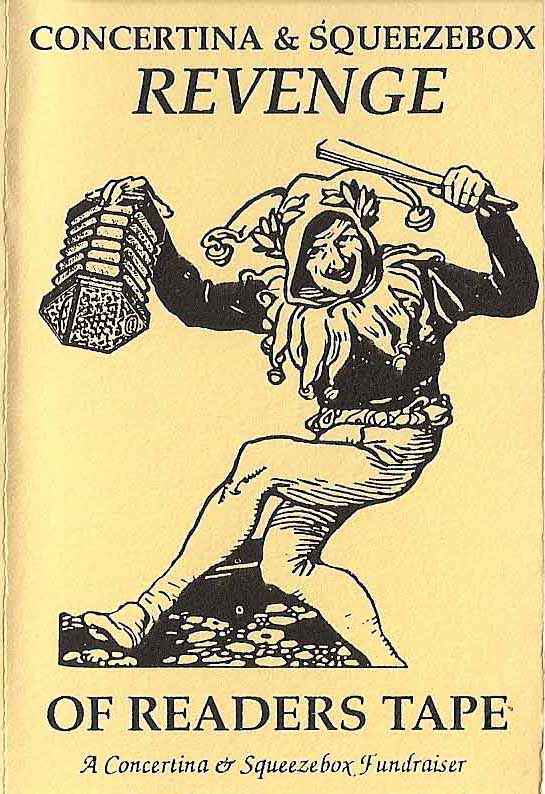 WELCOME TO REVENGE OF READERS’ TAPE! Our fourth sampler of homebrewed, cassette-recorded, free-reeding Concertina & Squeezebox readers’ contributions. This is a fundraising project for C&S Magazine.
In this tape we are extremely pleased to present the superb, inventive Anglo playing of JODY KRLJSKAL; we start off with Jody’s lovely composition The Procrastimition Waltz, which all attendees of our 1991 SQUEEZE-IN will remember as the highlight of the concert. IAN GOODIER & Friends show up from England with a number of great tracks; Ian is known as “the Best-Practised Concertina Player in the Universe”, having spent seven months in bed (following a back operation) doing nothing but squeezing away! Ian was another hit at our ‘91 Squeeze-in along with TIM JENNINGS & LEANNE PONDER, who have generously offered us a track from their recordingThe Water Kelpie for this sampler. FormerC&S Editor JOHN TOWNLEY,and Holmwood Concertina maker HAMISH BAYNE have also kicked in with selections from recent releases. Thanks to an enthusiastic recommendation from Alan Macdonald, we bring back Anglo player JACK KLINTWORTH & band for the beautiful Qot Pik Waltz. PETER TRIMMING also returns with some splendid Morris tunes on Anglo & McCann duet, and HUGH BLAKE treats us to some tunes on his 100-year-old single-row melodeon. Hugh’s rather grainy tracks herald the “field-quality’ recordings of DOUGLAS ROGERS, Professor of Guitar at the London College of Music, here presenting selections from Mozart & Molique in concert at two celebrated London churches; beautiful playing in the style of the great 19th Century concertina virtuosi. Our sincere thanks to all for their contributions.
This tape is presented as usual, with due apologies for variations in sound quality; while a number of tracks were recorded in professional studios, others were made at home with what may be charitably termed amateur equipment. So while we have striven for uniformity, you may need to adjust the volume on some tracks. As with our last tape, we have put the roughest cuts (Hugh and Douglas) at the end of Side 2; however, if you can weather the background noise and generally iffy sound quality you’ll still hear some marvelous stuff—and it’s absolutely unavailable elsewhere: here’s your chance!
All profits from the sale of Revenge of Readers’ go to finance the publication of Concertina & SqueezeboxMagazine. So thank you for resisting the temptation to copy this tape!

All titles traditional unless otherwise noted.