The PICTURE GALLERY for this issue features a photograph—after a daguerreotype from the London studio of Antoine Claudet, c. 1857—of Ms Mary Baker (d. 1882), nicknamed ‘Min’, holding an English concertina, probably a Wheatstone (see picture). 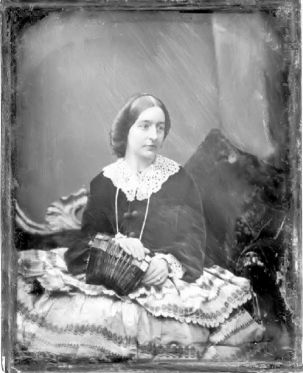 Mary ‘Min’ Baker (d. 1882), as shown in a photograph after a daguerreotype
by Antoine Claudet, c. 1857; reproduced courtesy of the Rev. Ian Graham

Mary was one of seven children born to a well-to-do family of merchants with extensive sugar holdings in Jamaica and Mauritius. In 1855, Mary, still unwed (she eventually married into a family named Cawsten), became the surrogate mother to the children of her widowed brother Samuel White Baker (1821-1893), who, after his wife passed away that year, sought solace in hunting and travel. In fact, Sam Baker became well known as a big-game hunter and explorer, and together with his second wife, Florence Szasz (von Sass), set out to search for the source of the Nile and eventually discovered Lake Albert (named after Prince Albert) in 1864 (for which he was knighted in 1866).1

What is particularly interesting about the photo of Mary and her concertina is that we may be able to identify the instrument she is holding and when she bought it. As Allan Atlas has suggested, Mary may well be the Miss Baker who purchased Wheatstone no. 6628 for twelve guineas on 31 October 1854, and later treated herself to two more concertinas: on 3 December 1858, when she borrowed Wheatstone 10663, and 27 August 1859, when she paid £2.0.0 for Wheatstone 9981.2

Finally, Mary might not have been the only member of the family who played the concertina, as the Wheatstone sales ledgers also record transactions for a Mrs and Mr Baker, with the latter having purchased his concertina on 23 August 1859, just four days prior to Ms Baker’s final transaction.

1. I tell the story of the Bakers’ exploration in To the Heart of the Nile: Lady Florence Baker and the Exploration of Central Africa (New York: William Morris, 2004).

Founded as a Mission in 1865 (its name was changed to the present one in 1878), the Salvation Army began as a movement to work amongst the poor in order to help alleviate their hardship. No doubt, the concertina was adopted early in the movement’s history because it was portable and thus suitable for the outdoor meetings that, in the early days, made up the bulk of the Army’s services. Our two photos of Salvation Army Concertina Bands illustrate the change that took place in their make-up during the early twentieth century.

As the photo of the Norwich Citadel Band (1907) makes clear (see Figure 1), the concertina of choice, at least early on, was the Anglo, perhaps because it had the advantage of being the least expensive of the concertinas, and thus the one most likely to be found in the hands of the people to which the Army ministered. The photo shows a band made up of twenty-one Anglos, at least three of which are Jeffries/Crabb-type instruments; in addition, there are a number of twenty-six-button Anglos, which, from the evidence of their gold tooling, might also be of the Jeffries/Crabb type. 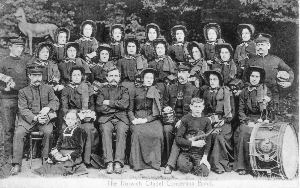 In contrast, the Sergeants’ International Training College Band of 1931 (see Figure 2) had nine concertinas (alongside the brass instruments that were beginning to replace them). Here there are at least five English concertinas—including an Aeola and an instrument recognizable as having been made by George Case—and at least two Triumph Duets. There is not a trace of an Anglo. 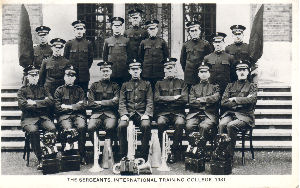 This change in instrumentation appears to have taken place around the end of World War I. Prior to that time, it seems that the Anglo was the concertina of choice, only to be supplanted by war’s end by the English and the Duet. I suspect that the reason had to do with versatility: both English and Duet are completely chromatic, with the former being available in models whose ranges extended from bass to piccolo.

Finally, I recently bought a Lachenal amboyna Edeophone from an Army contact: appropriately, it had been painted black!

Barbara Bartell and her Golden Edeophone

Our picture gallery features a publicity photo of Barbara Bartell (see Fig. 1), a 1920s-30s ‘variety artiste’ whom I met in the early 1980s when, well along in years, she was living in a Brixton (London) flat.

I was introduced to Barbara by her former theatrical agent after I had appeared on television, talking about concertinas. Barbara wanted to sell her two instruments, so I went to London to see her, and learned a good deal in the process.

Barbara was one of two daughters of Mr Stephen Bartle (she adopted ‘Bartell’ as her stage name), who, she told me, had been the ‘World Concertina Champion’ prior to Alexander Prince. When Barbara and her sister were of an age to perform (six or seven), they were taught the concertina, and, with their parents, formed the Royal Bartle Quartet (a performance before the royal family contributed to the name), which made a reputation for itself in the music halls. Barbara, of course, became an outstanding entertainer in her own right, playing concertina and musical glasses. She also did a lot of pantomime, usually as the principal boy (that is, the role of the juvenile male, customarily played by a young lady).

Both of the Bartle sisters played custom-built Lachenal Edeophones, which were made for them under special circumstances: while the Bartles paid for the parts, Lachenal provided the labour free of charge as a tribute to their father. The instruments were dazzling: amboyna casing, brown bellows, all finished off with gold-plated ends, buttons, and fittings.

I bought Barbara’s concertina, along with a miniature soprano that belonged to her father. (Her sister’s Edeophone was eventually purchased by one of the Richardson Brothers of Boys of the Lough fame.) And though I kept the instrument for some years, I eventually passed it on to a wonderful young musician in the Lake District who still plays it.

Looking back at the visit, I now have one regret. Though Barbara offered me a trunk-full of musical memorabilia—posters, programs, photographs, etc.—I politely turned down the offer down since I had no way of taking the materials with me. I guess they are now lost forever. I hope, though, that this little Picture Gallery feature will go some way in restoring the names of both Barbara Bartell and her father, who, though rarely mentioned nowadays, were once among the finest players of their generations.

POSTSCRIPT: My good friend Richard Harrison of Ferrybridge, Yorkshire, a concertinist and collector of 78-rpm concertina recordings, has a rare copy of Stephen Bartle playing ‘Hornpipe Medley/Under the Freedom Flag’ on a World War I-vintage recording issued on the Olympic label (No. 173). It features Bartle on English concertina with piano accompaniment; and, as Richard says, the playing is ‘brilliant’, even more engaging than that on the many 78s that he has of Alexander Prince.

Fig. 1. Barbara Bartell and her golden Edeophone as shown in a publicity photo from the 1930s (courtesy of Chris Algar, Barleycorn Concertinas).