Tonight’s guest is Cohen Braithwaite-Kilcoyne, concertina/melodeon player with Granny’s Attic, one of the young roots outfits currently freshening up the English Folk circuit.

PW: Well 2017 will see Granny’s Attic livening up Chester, Saddleworth, Bromyard, Banbury & Hartlepool Folk Festivals among others. So I’m here with a biriyani from No Bones Jones & couple of virtual pints of Doombar from the Camra tent.

So we’ll kick off with a drinking song from The Dubliners (and one of your set list Cohen) “Whisky in the Jar”:

END_OF_DOCUMENT_TOKEN_TO_BE_REPLACED

The Concertina Journal is now online. It is the follow up of PICA and only online not in print. 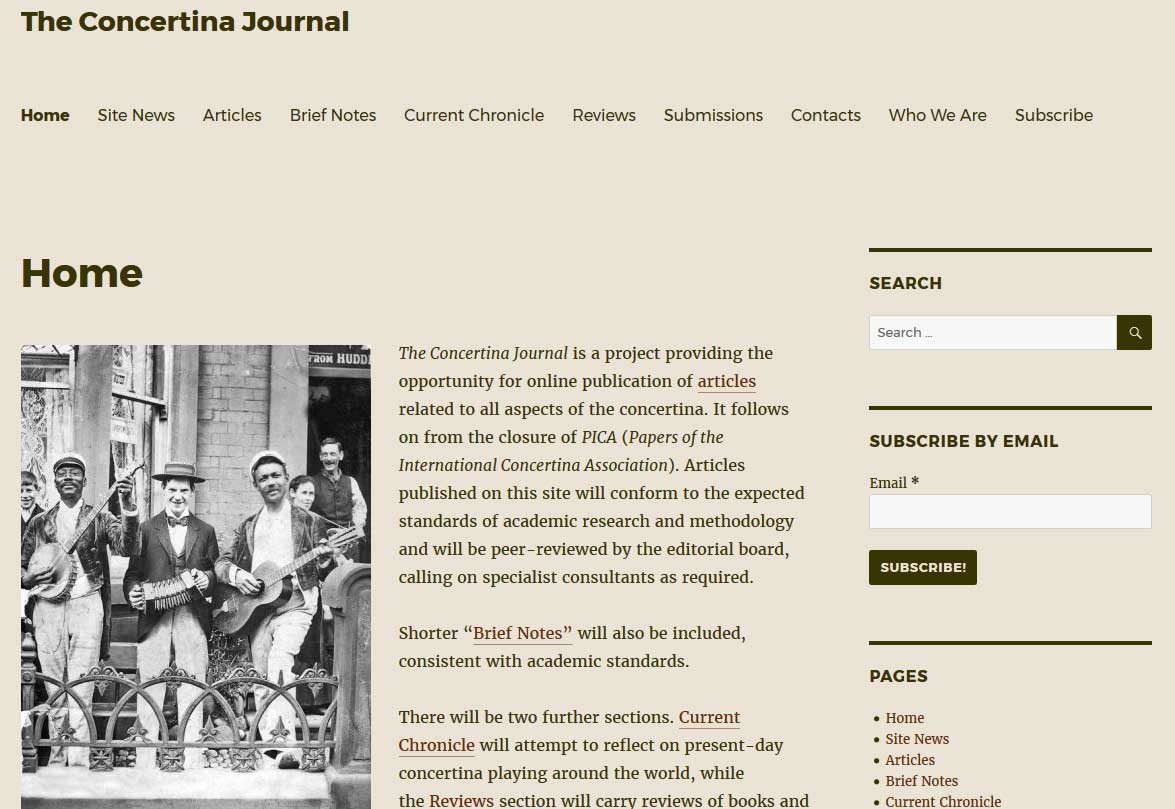 END_OF_DOCUMENT_TOKEN_TO_BE_REPLACED

On Friday, 17 March 2006, the Center for the Study of Free-Reed Instruments at The Graduate School of The City University of New York presented a concert entitled Viva Regondi, likely the first all-Regondi concert in ‘modern’ times.

END_OF_DOCUMENT_TOKEN_TO_BE_REPLACED

A small number of advertisements were included in PICA as a service to Concertina Players, the ICA membership and the people and players who gave their time and knowledge to create this publication. The advertisements appear below in the same order as they appeared in PICA.

END_OF_DOCUMENT_TOKEN_TO_BE_REPLACED

Chris Algar (barleycorn@concertina.co.uk) is head of Barleycorn Concertinas (Stoke-on-Trent), which is generally thought to have the largest selection of concertinas in the world, including rare and unusual ones. A longtime Morris musician, he now plays Irish music with a couple of bands.

Allan Atlas (aatlas@gc.cuny.edu) is on the Musicology faculty at The Graduate Center of The City University of New York. His performance—together with mezzo-soprano Julia Grella O’Connell—of The Confession of Devorgilla (Music Supplement) can be heard at the online version of PICA.

Benjamin Bierman (ben@benbierman.com) is a composer-arranger-trumpet player with a wide range of musical experience. As a trumpeter, he has performed and recorded with the likes of B. B. King, Machito, Tito Puente, and Ray Barretto; as a composer—he is completing the Ph.D. in Composition at The Graduate Center of The City University of New York—he has studied with David Del Tredici, Tania León, and John Corigliano, and his Proximities for orchestra was recently accorded ‘special recognition’ by the Los Angeles Philharmonic’s Synergy Project competition. Currently a Graduate Teaching Fellow at Baruch College/CUNY, he arranged The Confession of Devorgilla for English concertina and mezzo-soprano on commission from the New York Victorian Consort.

Faye Debenham was born in Western Australia and immigrated to British Columbia, Canada. Though Vancouver was a step in a ‘working holiday’ around the world, it was there that she met and married Albert Debenham and, most latterly, enjoyed a career encompassing politics and government circles. Sparked in part by her husband’s tale of two grandparents of artistic merit—grandfather Edwin, a prominent Victorian photographer, and grandmother Marie (Lachenal), a kind and gentle lady ‘who played the concertina’, she undertook research on the Debenham family, which in turn led to research on the concertina and the partnership with her co-author, Randall C. Merris.

Roger Digby has been playing Anglo concertina for over thirty years. Playing in a fiercely English style when performing with Flowers and Frolics, he extends the instrument’s range far beyond its assumed limitations, stretching it most fully when accompanying the wide repertoire of Bob Davenport. He has a passionate belief in the integrity of traditional music.

Eric Matusewitch (ematuse@aol.com) is the Deputy Director of the New York City Equal Employment Practices Commission and author of the Manager’s Handbook on Employment Discrimination Law (Andrews Publications, 2000). The son of the late concertina virtuoso Boris Matusewitch (1918-1978) and himself an amateur concertinist, he often performed with his father during the 1960s-1970s, with programs at Carnegie Recital Hall and the New-York Historical Society among their many joint performances (yes, they do use a hyphen in New-York).

Randall C. Merris (rmerris@imf.org) is an economist at the International Monetary Fund and an amateur concertinist. He has been an economist at the Federal Reserve Bank of Chicago, has taught economics and finance at the Kellogg Graduate School of Management, Northwestern University, and has consulted with Asian governments on economic policy and financial reform. He writes mainly on economics and occasionally on the concertina and its history, and he is the author of ‘Instruction Manuals for the English, Anglo, and Duet Concertina: An Annotated Bibliography’, The Free-Reed Journal, 4 (2002), which is also available online at <http://www.concertina.com/merris/bibliography>.

Harry Scurfield (harry@scurfieldh.fsnet.co.uk) plays and sometimes teaches the Anglo concertina. His repertoire includes adaptations of blues and early jazz, English traditional dance tunes, and raucous singing accompanied on the instrument. An interest in the broad range of possible contexts for the Anglo led, amongst other things, to a lasting interest in African concertina playing.

Tom Tonon (ttonon@bluesbox.biz) received a BS in Mechanical Engineering from Pennsylvania State University and an MA and Ph.D. in Aerospace and Mechanical Sciences from Princeton University. He has worked in several areas, including literature (writing), carpentry, factory assembly, liquid propellant rocket engines, thin film photovoltaics, and catalytic combustion, and is currently Senior Engineer at AIL Research, Inc., working in the field of liquid desiccant air-conditioning. He has several publications and patents in these areas, and is currently developing an acoustic pitch-bending technology for free-reed instruments.

CHRIS ALGAR has been dealing in concertinas for thirty years, having bought his first one in 1974, when he was a young school teacher. Over the years the concertina dealing increased, and finally, in 2001, he retired from teaching in order to devote all his time to it. His Barleycorn Concertinas in Stoke-on-Trent is generally thought to have the largest selection of concertinas in the world, including rare and unusual ones. Though for many years a Morris musician, he how plays Irish music in a couple of bands.

ALLAN ATLAS teaches music history at The Graduate Center, The City University of New York, where he heads the Center for the Study of Free-Reed Instruments. Among his concertina-related publications: Contemplating the Concertina: An Historically-Informed Tutor for the English Concertina (Amherst: The Button Box, 2003) and ‘The Victorian Concertina: Some Issues Relating to Performance Practice’, forthcoming in Nineteenth-Century Music Review,2 (Ashgate, 2005).

RICHARD CARLIN is the author of The English Concertina (New York: Oak Publications, 1977) and numerous articles on the instrument in such journals as Free Reed, Mugwumps, and The Free-Reed Journal. The present article is an outgrowth of a National Endowment for the Humanities Youth Award, which supported his project of recording and interviewing concertina players in England in 1975; he is currently Senior Editor for music books at Routledge publishers.

STEPHEN CHAMBERS collects and does research on early free-reed instruments, especially the concertina. Among the gems of his collection: Wheatstone & Co.’s very first concertina! He caught the free-reed bug at the age of eighteen, which disease seemingly runs in the family, as his great-grandfather had a three-manual American organ (with pedal board!) in the house, while his father’s ambition was to learn the piano accordion (World War II got in the way). Among his publications: ‘Louis Lachenal: “Engineer and Concertina Manufacturer”, Part 1’, The Free-Reed Journal, 1 (1999), and ‘An Annotated Catalogue of Historic European Free-Reed Instruments in my Private Collection’, in Harmonium und Handharmonika: 20. Musikinstrumentenbau-Symposium, Michaelstein, 19. bis 20. November 1999, ed. Monika Lustig. Michaelsteiner Konferenzenberichte, 62 (Michaelstein, 2002).

ROGER DIGBY has been playing Anglo for more than thirty years. A founding member of the infamous ‘Flowers and Frolics’, he was a central figure in the revival of English Country music, and still plays the repertoire of southern England. He has also taken the Anglo into other areas, and is as likely to play ‘Ain’t Misbehavin’ as he is ‘The Shepton Mallet Hornpipe’. A thirty-year friendship with Bob Davenport, one of England’s leading traditional singers, continues today and stretches both Roger and the Anglo to their outer limits!

RACHEL HALL is a second-generation English concertina player who performs a variety of ethnic folk styles with the trio Simple Gifts. She is especially interested in the role of the concertina in the tradition of Jewish music. Her recordings with Simple Gifts include Other Places, Other Times (1996), Time and Again (1999), and Crossing Borders (2004). Rachel is an Assistant Professor of Mathematics at Saint Joseph’s University in Philadelphia.